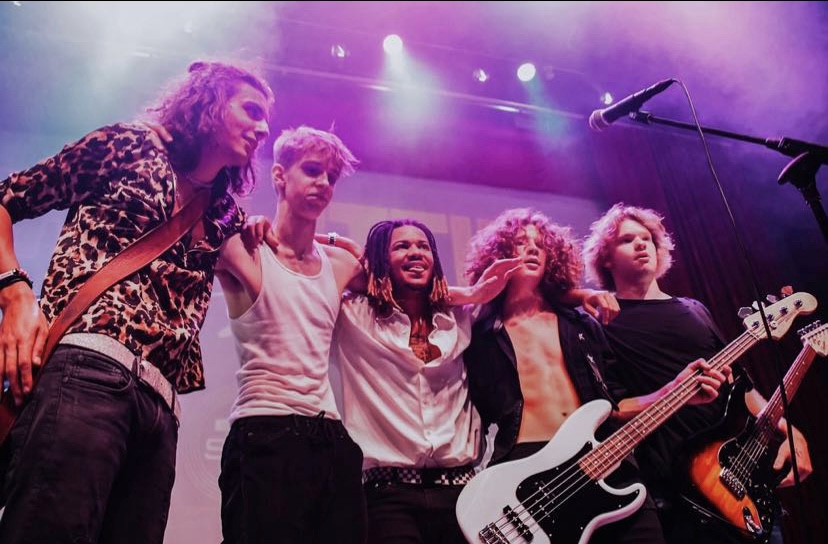 Sophomore Ryan Litteken poses for a picture along with his band, Guilty Pleasures. Senior Evan Gay is also a member of the band, but is not pictured.

Sophomore Ryan Litteken poses for a picture along with his band, Guilty Pleasures. Senior Evan Gay is also a member of the band, but is not pictured.

Well these South High musicians are trying to keep the rock and roll scene alive in St. Louis.

Senior Sara Ahmadian is the lead singer of a rock band called Hazmatstl. The band has been together since January 2021.

“Over the summer we would practice a lot more than now. About five hours, more than three days a week. Whereas now we don’t have as much time with school, so we practice about two to three times a week in our drummer’s basement,” Ahmadian said.

Compared to some of the other student bands, practicing this often seems like a normal amount. Junior Kannon Stein, who is in a band called The Lemons, says they also typically practice 3 times a week. And Ryan Litteken, sophomore, says his band, Guilty Pleasures, practices once a week if the band doesn’t have a show coming up. But when they do have a show, they practice every day.

According to Litteken, some people who inspire Guilty Pleasures’ music are “Jimmy Page and Nikki Sixx.” Page is the lead guitarist of the band Led Zeppelin, and Sixx is the guitarist for the band Motley Crue.

For the Lemons it was more about what inspired them rather than who, and it was the music that they listen to impacts the music they make. For Hazmat an artist that inspired their music was “Maneskin definitely.” Maneskin is an Italian rock band that started in 2016.

Students at South like to go to their peers’ concerts and it encourages the bands. Litteken explains how inspiring it was seeing all his friends there when he performs. He says it’s his favorite memory since being in the band.

Ahmadian said her favorite memory is very recent, when Hazmatstl played at the famous Duck Room down in the Delmar Loop and was “by far our biggest show.”

However, The Lemons’ favorite memory is their very first show they ever played, according to Steinmeyer.

The Lemons have been around the longest so Steinmeyer says, “I’m not really sure. I’m pretty sure Dylan said his aunt came up with it. It’s like a weird story. We were just writing words on a chalkboard and that was one of the words and we just circled it.”

Most bands you might think have the same goal, to make it big, and that’s what Litteken said. However Steinmeyer’s goals are much more modest.

“I’d like to have two albums out before we graduate high school,” he said.

Ahmadian said Hazmat’s goals are even sooner than that.

“Right now, our goal is to release singles,” she said.

Students being in these bands teaches them lots of things and shapes their everyday lives outside of school too. According to Hazmat’s lead singer, Sara Ahmadian, being in a band changed her lifestyle and taught her to have confidence.

“Performing in front of people–you have to have a lot of confidence for that,” she said.