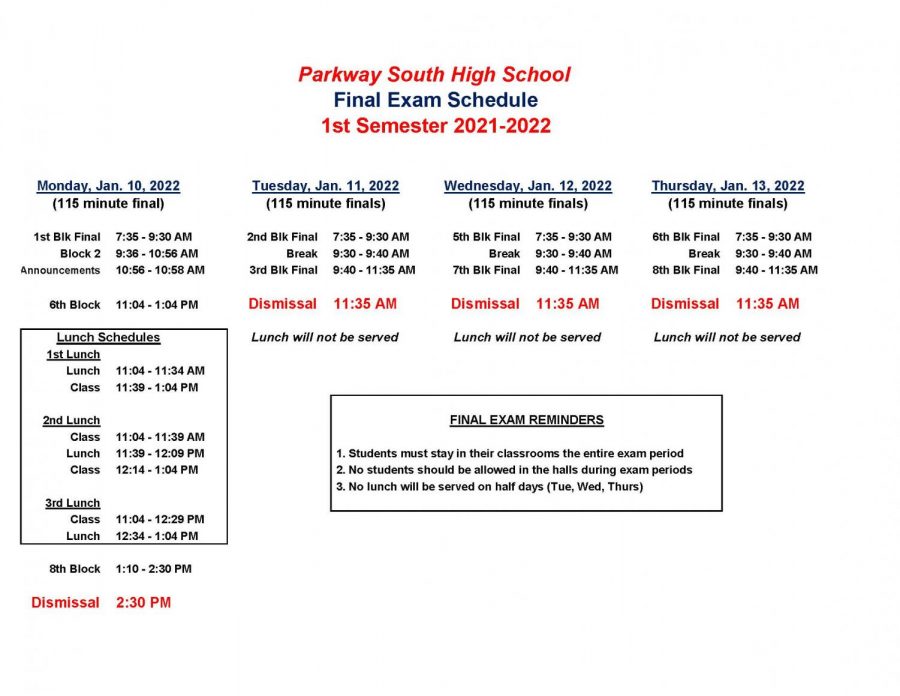 After every semester, students and teachers at South High have to prepare themselves physically and mentally for the dreaded final exams. This year finals start January 10th and end on January 13th.

Some teachers require final projects such as presentations, so you can apply what you learned in a more creative way, while other teachers require students to take a traditional exam. Either way, with seven classes this school year, both students and teachers have their work cut out for them, students with balancing studying and project creation, and teachers with reteaching and grading. With all of this new stress piled on their already existing stress, don’t students and teachers deserve a break? Absolutely, and with the current finals schedule taking place after winter break, it would make their lives much easier if finals just disappeared.

A final exam is basically just testing you on what you learned throughout the year and either asking you to apply it through a project or through a test. Projects are clearly a more effective way of testing knowledge because they require students to apply what they learned in a more creative way, whereas paper tests are essentially just a student regurgitating information back onto a paper. This process doesn’t allow a student to take what they learned and apply it, they are just essentially repeating what they heard, but just because they can spew out every battle of the Civil War, doesn’t mean they could give you the specifics that matter. With students just taking the test on autopilot, are they really learning anything when they cram for exams? And yes, cram not study because let’s be real, students feel the need to stay up to the late hours of the night trying to cram all that information into their heads even if they know it because they don’t want to risk a bad finals score. A recent study done by Stanford University reveals that students that cram for tests and exams typically only pass their examinations with an average score and if you’re at an F, that really isn’t going to help you. The study also showed that the majority of the information gained through cramming sessions ends up being forgotten not just over a period of time but even during the actual test itself. So in the end, finals are just creating unhealthy habits for a student, not actually helping them learn, and won’t make a big impact in their grade when they require it.

On July 19, 2019, Governor Mike Parson signed a bill that made it so school districts in Missouri couldn’t start school more than 10 days before the first Monday of September. This not only pushed back our start date but also pushed back the date for our finals. Instead of taking your finals before winter break, we now have to take finals after the break. Most students forget what they learned after one extended weekend, so imagine all the information they forget after two weeks. Teachers know this, so as soon as we come back to school from break, teachers have to quickly cram a whole semester’s worth of knowledge back into our brains in about a week’s time. Not only that, but even when students manage to get through finals, instead of having a two-week break to recuperate and relax before jumping into another semester, they get four days before having to reset and after all that studying and project creating four days just isn’t enough. And let’s not forget about our teachers. Not only do they have to spend the week trying to reteach all of their classes, afterward they then have to grade all of those exams and instead of having two weeks, they have four days if they want their students to have their final grade before the second semester. This could mean students don’t get their final grade until the second semester, and on top of that teachers have to jump back into a semester after spending four days grading.

Another problem with finals is that for the most part, you don’t actually get to see the test. Sure you get to see the score you got, but you don’t know what you missed because you don’t get to see the final test. One big part of learning is seeing the mistakes you’ve made and figuring out how to correct them for future uses, but with a final, you don’t get to know what you missed. How are we expected to learn from our mistakes if we don’t know what our mistakes are? I mean sure, you probably could ask the teacher to see the test if it was a first-semester exam, but if it’s a second-semester exam then you more than likely just walk out of school for summer break and don’t look back which means you may leave not knowing what you need to know.

One argument in favor of finals is that students should be reviewing the material over break since they know they have a final afterward. Now I don’t know about you, but during winter BREAK I intend to relax and de-stress from the daily grind that is school and I know most students aren’t studying over break because 1.) they worked their butts off for most of a semester and deserve some rest and relaxation and 2.) they could be trying to enjoy time with family and friends and the last thing they are thinking about is school. Not only that, but the teachers deserve that break just as much as we do, and they don’t get that because a good chunk of them have to continue to grade normal work and plan their review days for when they get back. If we had finals before break like they once were, a teacher could dedicate the first few days of break to submitting final grades and then kick back for the rest of the two weeks before diving into teaching again.

Overall the students and staff would be much better off without finals. Our student body and school faculty work hard all year round and deserve to have a break because we worked for it and earned it. I say we find an alternative to a standard final exam or just make them optional because they clearly aren’t working the way they should and all they do is add more work and stress to a student or teacher.

For many students, finals week is the most dreaded time in the school year. This is especially true now that a Missouri law mandates that school can start no sooner than ten days before the first Monday of September. This pushes finals back until after Winter Break to the week of January 10th. And while I am not the hugest fan of this new change, I don’t think finals as a whole are terrible. In fact, I think that as students we’re better off with them in our curriculum.

I used to be terrified of the way final exams are weighted, but I now think it’s one of the biggest reasons why final exams deserve their place in a high school curriculum. Without a big weighted test at the end, students would have no way to really reflect progressive improvement over the course of the semester. It’s the grand weight of a final that allows unsatisfied students to take a big last stand for their grade. Now some people are afraid the grade they get on the final exam will bring down their previous good grades, but generally speaking, people who have good grades are the safest when it comes to final exams. Think about what doing really well in a class looks like–completed assignments (that you can study from) and probably retaining a lot of the material. Both of these things set people up to be better at studying for finals.

Another unsung benefit of final exams is that when studying for them, students are forced to look at all the learning material they studied that semester together. This is especially important in subjects that build on previous material. For instance, somebody trying to understand basic right triangle trigonometry might struggle if they don’t remember how the hypotenuse works, but if they had to review the hypotenuse for a cumulative final exam, their understanding of the newer concept would be improved in a way it wouldn’t if they just had studied the newer concepts like most students do on a normal test.

But for some people, their fear of finals nowadays is less about the tests themselves and more about the timing. I am going to be honest. The new law that made finals week after Winter Break is incredibly hard to argue in favor of, so I am just not going to. Most students have other obligations over winter break and sometimes those obligations, such as travelling overseas to see their families, are not easy to do while studying. I only think it’s not all bad. Sometimes two extra weeks of no school can help people find time to properly study. For students that juggle work and extracurricular activities, or really anyone that needs more time to look over concepts, two extra weeks can mean the difference between feeling fully prepared when they sit down to take their final exam and feeling completely drained from a night of anxiety-stricken cramming. Also, being able to space out study sessions over Winter Break can invoke the spacing effect, which is the effect where more spaced out learning events result in better long-term retention.

All in all, finals have an important role in high school education. They give students the chance to review previous material, show how they improved, and fight for a better grade. The only thing that can really suck about finals is that they’re now after Winter break, and that only sucks some of the time. At the end of the day, finals may be scary, but they deserve to be part of our lives as students.