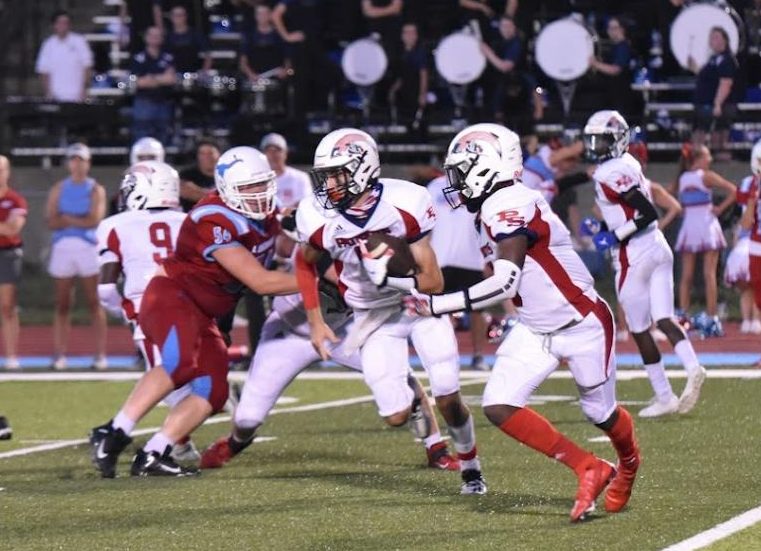 Senior quarterback Quinn Candelario runs with the ball as junior running back Derrion Boyd looks for the pitch in the game against Parkway West. (Mia Stahl)

Senior quarterback Quinn Candelario runs with the ball as junior running back Derrion Boyd looks for the pitch in the game against Parkway West.

South travels to Pattonville tomorrow night for a non-conference matchup

The Parkway South Patriots varsity football team has started the 2021 season with a 1-3 record, however, the record does not reflect the true talent of this team, according to Assistant Coach Jeremy Houchins.

The Patriots are traveling to Pattonville tomorrow to take on the 2-3 Pirates. Pattonville has victories over Fox and Ritenour, but they’re coming off a 42-7 loss to Marquette last week.

So far this season, junior wide receiver Pierce Bryant leads the Patriots in touchdowns with 2. Junior running back LaRon Eason leads the team in rushing with 246 total yards. On the defensive side of the ball, senior linebacker Will Triplett and junior defensive end Kyle Brown lead the Patriots with 16 total tackles.

Houchins commented on the talent the team possesses.

“I think we have some really talented players and guys that work hard in each position group. We just need everyone to follow that lead to play to their potential,” he said.

The team lost a rivalry game at Parkway West on Aug. 27 but defeated Webster 20-14 in dramatic fashion in the first home game of the season, on Sept. 2.

Sophomore quarterback Eddie Ahearn said he realizes the importance of that first win of the season.

“The win against Webster helped us realize we can win and are a good team,” Ahearn said.

That game put them in the win column and boosted the team’s confidence. One week later they went to Mehlville and were defeated and then lost to the Oakville Tigers two weeks later earning them the record of 1-3.

Despite their losing record to start the season, Coach Hounchins said he is not deterred.

“We are not satisfied because we have not played our best football yet,” he said.

The Patriots have been battling adversity from the start of the season dealing with COVID complications, coaches being out sick, weather issues, and injuries. Junior Darion Boyd, a wide receiver, has torn his ACL and starting quarterback Owen Veltop was injured in the beginning of the first game of the Patriots season.

Ahearn agrees that the team had to deal with a lot of adversity.,

“Injuries have affected the way we play because it’s causing us to move kids in positions they have never played before,” he said.

Injuries have been a huge issue with the varsity team but what has affected the entire program is COVID. The week after the Mehlville game, COVID spread throughout the team quarantining at least 15 JV players and 11 on Varsity. The week-four game against Ritenour was canceled due to the spread of COVID through the Parkway South football program. The game did not count against their record.

Unlike the Varsity team, the JV team prevailed over Oakville 24-16 on Sept. 27.

Junior Varsity Coach James Cramer talks about his fears of the team not practicing together for a week.

“We have to make up for lost time. My hope is they come back recharged, but my fear is that the time off will take some time to reacclimate to football after sitting at home for a week.”

Every team in every sport has weaknesses, but lineman Nathan Jimenez has a different view of weakness and this team.

“As far as I can see there is no weakness in my team. I believe with any problem we face we as a team would learn from and make sure it is a strength rather than a weakness.”

Along with strengths and weaknesses, there are goals for the season. Asking Jimenez about the goals of the season in his senior year he said,

“My goal would be having fun with my team going out there and playing like no tomorrow.”

Ahearn talked about his goals for the season.

Players’ goals for the season seem to be focused on improving, having fun, and trying to play the best they can as a team.

Coach Houchins’ goals for the year go beyond this season.

“Is to create awesome young men that will be great citizens, fathers, and husbands someday,” he said.