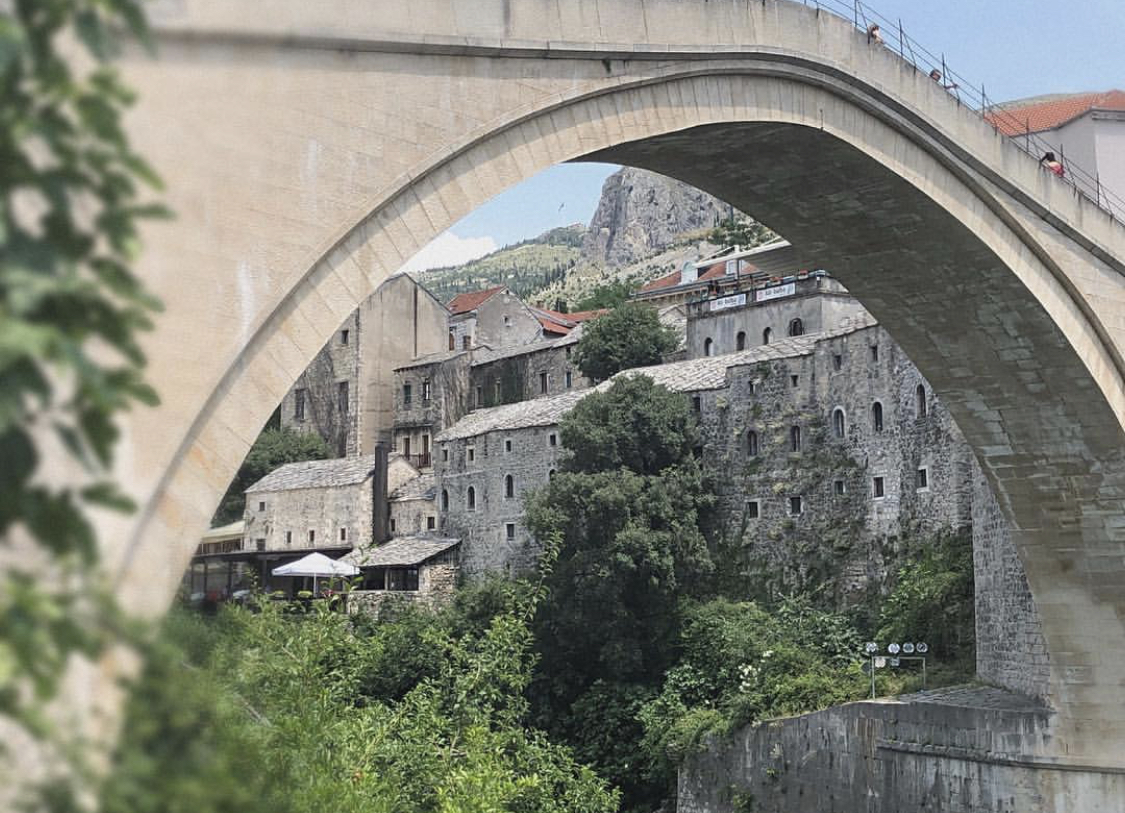 Stari Most is the name of this famous bridge in Bosnia. (Mia Hadziselimovic)

Stari Most is the name of this famous bridge in Bosnia.

Next time you're looking for a place to eat out, consider a Bosnian restaurant.

Bosnia Herzegovina located just in the western Balkin Peninsula in Europe and has a  population of 4.5 million people and 80,000 just in St. Louis itself.

I grew up traveling to Bosnia every summer and eating authentic Bosnian cuisine such as Čevapi, Grah, filled peppers, and Sarma. Since I live in the St. Louis area and it is the highest Bosnian-populated area, I decided to go to three popular Bosnian restaurants here in St. Louis: J’s Pitaria, Berix, and Grbic and see how do they compare to the food in Bosnia. 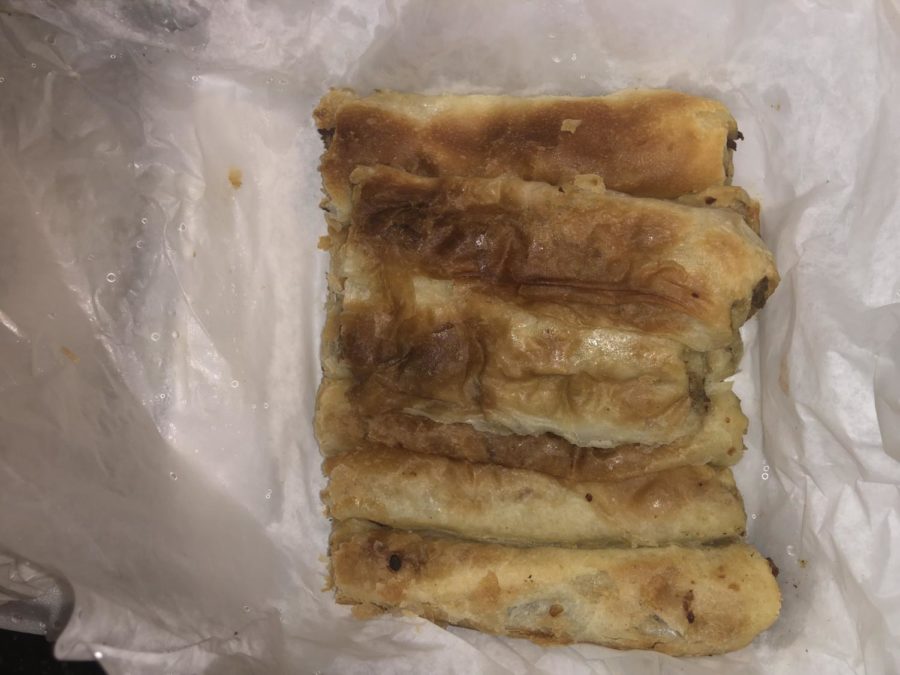 The first restaurant I went to was J’s Pitaria. This restaurant is located just along Gravois Road in St. Louis, MO. It is open from 10 a.m. to 7 p.m. on weekdays and on Mondays it is closed. It is open 11 a.m. to 5 p.m. on the weekends and the restaurant also offers delivery from 11 p.m. to 2 p.m. It’s not really like a normal restaurants where there is a waiter to escort you to your seat and you order from your table and they bring you the food. Rather, when you walk in you go straight to the counter to order and they call you up to get your food. One thing that I heard they were best known for was their Pita. Pita is baked dough stuffed with meat, cheese, potato, and is a very popular cuisine in Bosnia. I had Burek, which is a beef Pita.  I also had Jogurt which is a traditional drink you generally have with Pita and the cost was around $10 for my meal.

The Pita was really good. It reminded me of this Pita place I would go to when I was in Bosnia and get the same type of pita. I could taste both the Pita bread and beef and had a very soft texture. The yogurt tasted like a different yogurt than I’ve ever had before. It was very milky with a salty and sour taste. The texture was very smooth and was very easy to swallow. Overall, J’s Pitaria is very delicious and definitely is a good place to stop and eat. 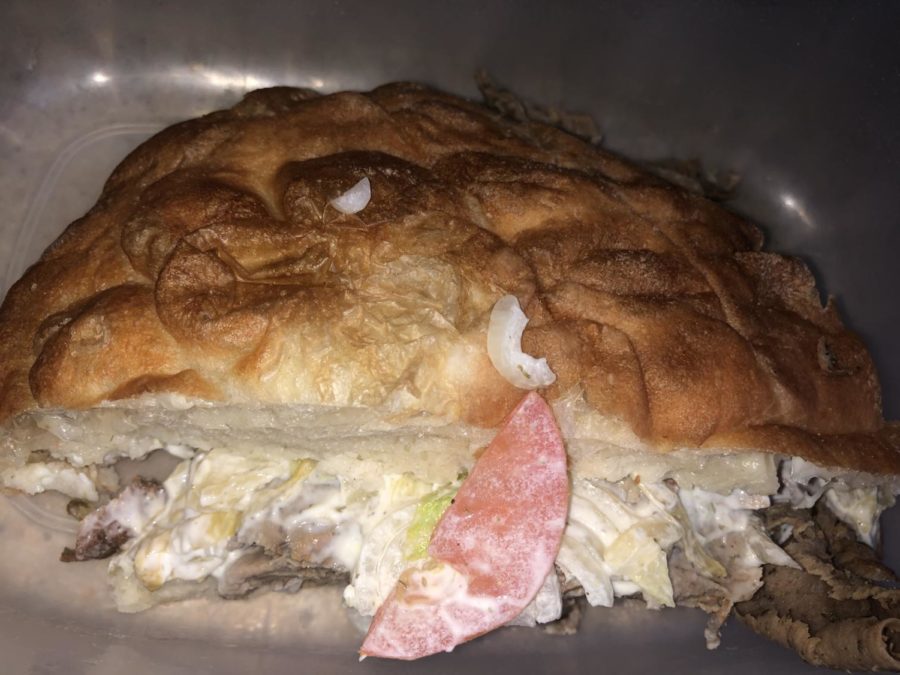 The second restaurant I went to was Berix. It is located along Lemay Road. The restaurant is open from 10 a.m. to 8 p.m on Mondays, Tuesdays, and Thursdays and 9 a.m. to 8 p.m on Fridays and Saturdays. It is closed on Sundays and they don’t have any delivery but, you can make an order through the phone and pick up at any time through the hours. When I first walked into the restaurant, there were a lot of people there. I wasn’t that surprised because it was a very popular restaurant and it was well known in the St. Louis area. There is a counter where you order on the right and there is a seating area on the left. Berix had kind of the same concept as J’s Pitaria which was where you ordered at the counter and seat yourself but the employee does bring you your food but, you could wait for someone to serve you but that would take some time because of how crowded it generally is. I had a Doner which is a meat, tomatoes, lettuce, and ranch sandwich stuffed in pita bread with a side of onions and a Fanta which cost me around $9.50 for my meal.

The Doner was very tasty and I thought it was well made. Although, the beef inside tasted a little soggy and it was a little bit dry and the Fanta was very carbonated, but it tasted a little watered down. I recommend to go and check this place out anyway because they do have a great selection of food like burgers, salads, Pita, etc. 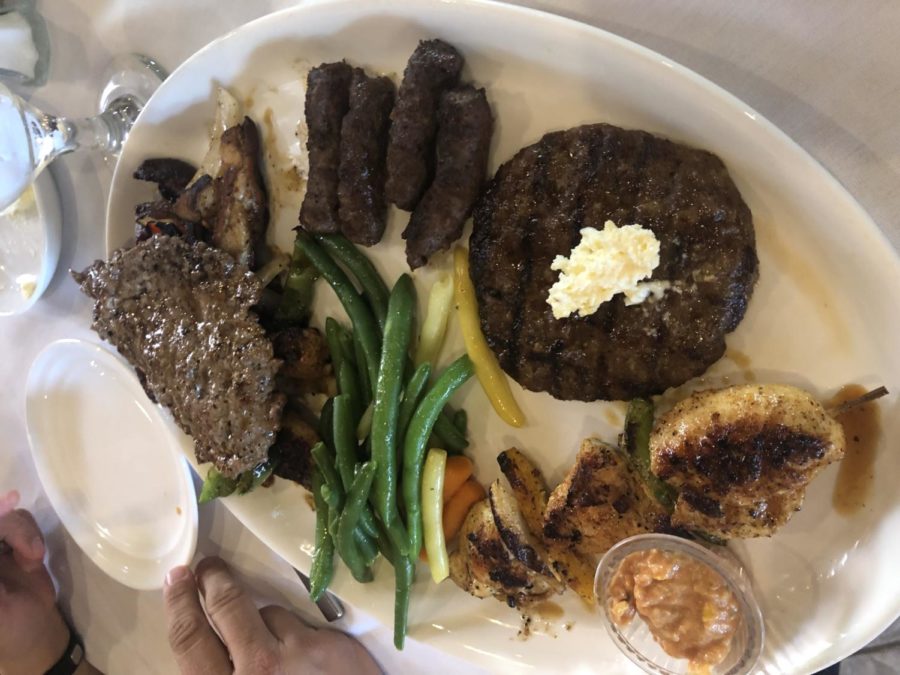 Then lastly I went to Grbic. It is located along Keokuk Street in St. Louis, MO. The hours are 4 p.m. – 9:30 p.m. on Wednesdays through Fridays, 12 p.m. to 10 p.m. on Saturdays, 12 p.m. to 8 p.m. on Saturdays, and Closed on Mondays and Tuesdays. When you walk in and there is a huge room with seats and another room on the right side and a bar next to the room. In this restaurant, you are hosted to your seat and order from a menu. One thing I noticed is that it is more formal than the other restaurants I’ve been to and they had a bigger option of food like burgers, salads, chicken, soup, etc. They serve bread as an appetizer and I had a mixed platter with steak, a burger, mixed vegetables, kebab, and cevapi, which is a mini beef grilled sausage. My meal overall was around $25 which I thought was a very expensive price because the portion was big but for $25, I think it is overpriced. I also had dessert here as well. All I had was a Nutella Crepe with cinnamon. It may sound gross but it was very delicious.

I did like my food a lot and I thought it was well cooked. The vegetables weren’t fancy, but they were well grilled and the meat was very juicy and had a good taste. One negative thing is that I had to wait about 20 minutes for my food to come and the restaurant was quite empty. The whole restaurant had a Bosnian feel to it. They were playing Bosnian music, they had paintings of Bosnian cities on the walls and even had a mini cafe by the entrance, which Cafes are very common and a cultural thing in Bosnia and overall, I had a really good experience. I would definitely recommend this restaurant but, to make sure you have the money for it.

Overall, I thought the restaurants were very good. Although, I wouldn’t compare them to the food in Bosnia. Restaurant J’s Pitaria reminded me the most of Bosnia because it did taste like Pita I would get in Bosnia. I think that it is hard to compare the same food from two different countries because each country produces food with different ingredients and you aren’t gonna get the exact same product as a result. I didn’t expect all of them to taste exactly the same but how they presented and how they compared. If you ever want to go to more of a Bosnian like place I would go to Berix because they serve all Bosnian food and desserts and if you want both American, and Bosnian, I would recommend Grbic. I think these restaurants are definitely different from each other because each restaurant had a different style but overall are definitely worth checking out in your free time.