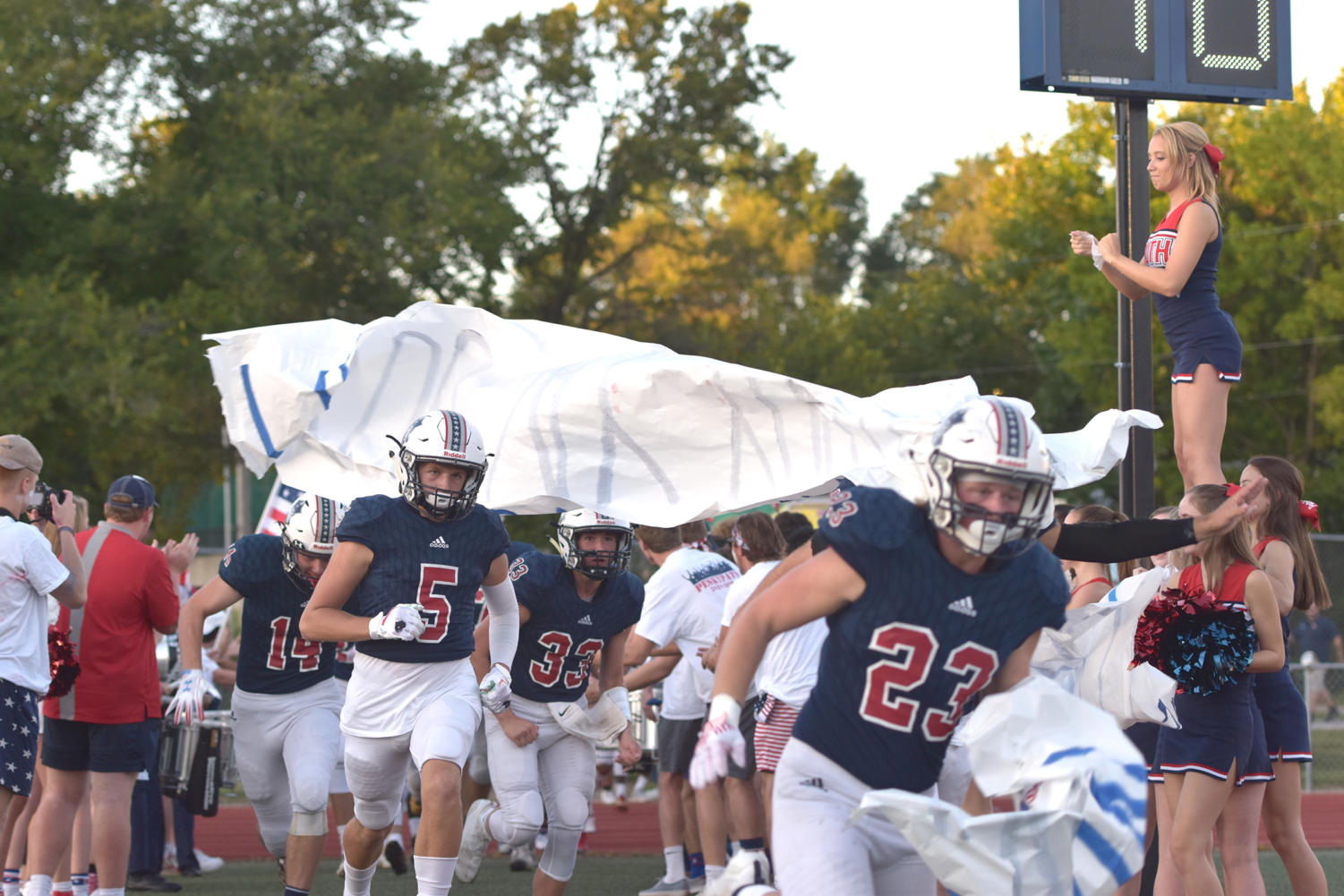 Seniors Nolan Lombardo and Jack Crayton lead the Patriots onto the field at the team's first home game against Northwest, Sept. 6. (Nick Powell)

Seniors Nolan Lombardo and Jack Crayton lead the Patriots onto the field at the team's first home game against Northwest, Sept. 6.

Tonight, the varsity football Patriots travel to Marquette to take on the undefeated Mustangs at 7 p.m.

The Mustangs are coming off of a 42-23 victory over the Kirkwood Pioneers last week. Offensively the Mustangs are led by running back Christopher Kreh who already has 522 yards and 10 touchdowns on the young season.

Despite their 0-3 record, the Patriots varsity football team has goals for the season, according to Head Coach Joe Rosewell.

“Control what we can control, and that’s us. Not worry about the things we can’t control,” Rosewell said.

One major change for this season comes on the offensive side of the ball. This year the Patriots are implementing a spread offense instead of their usual option-style offense. Rosewell has also taken the reigns as offensive coordinator for the team.

“I think the guys have really bought into it.  They are liking it better and able to adapt to a more spread offense,” he said.

Rosewell talked about some of his key players for the season.

Veltrop, the Patriots’ starting quarterback. So far this season he has completed 12 of his 18 pass attempts for 42 yards. Defensively, junior linebacker Mali Walton sports 42 tackles. Walton is also the starting running back, and has the most touchdowns on the team with 2.

With the growth in youth on the team Rosewell talked about some of his younger key players.

“Definitely [sophomore] Tyrel Dickerson could be a force as he can be used all over the field,” he said.

Rosewell said the Patriots could be compared more to a college team than a NFL team.

“We run a more college playstyle but if I had to say an NFL team probably the Chiefs we are able to use all our guys in different ways,” he said.

“The biggest rivalry game we have left is Lafayette. They’re always a fun game,” he said.

The Patriots take on Lafayette on Oct. 4 at home. Dittmeier commented on why he believes in the guys this year.

“I believe in this team because everyone is playing for the guys lined up next to them, and not for himself. This is a family,” he said.

Dittmeier mentioned his favorite way to get hyped up before the games.

“We get pumped for games by blasting Chief Keef in the weight room before Coach Rosewell walks in,” he said.

Dittmeier said he loves hitting people on the field.

“My favorite part about the game… has to be hitting people in different color jerseys and hyping the crowd up,” he said.

Dittmeier talked about when he started playing and why he stuck with it.

“I started playing in 7th grade and I continue playing because there’s nothing better than the high school friday night lights feeling,” he said.

Another captain on the team is senior safety and wide receiver Jack Crayton. He explained how he keeps his cool during the games.

“I like to go over and get some water as often as possible and talk to my teammates,” he said.

Crayton also talked about the team’s strength and weaknesses of the team.

“This team has a lot of strengths such as we are athletic, fast, and aggressive and can fly around the field when we need to. Our only weakness is we are outsized we don’t have any big guys and it’s hard for some of us to beat out those bigger guys,” Crayton said.

Crayton said if he had to choose a football inspiration he said it would be his own dad.

“My dad is the one who got me into football and taught me what I know and gave me the love for the game,” he said.