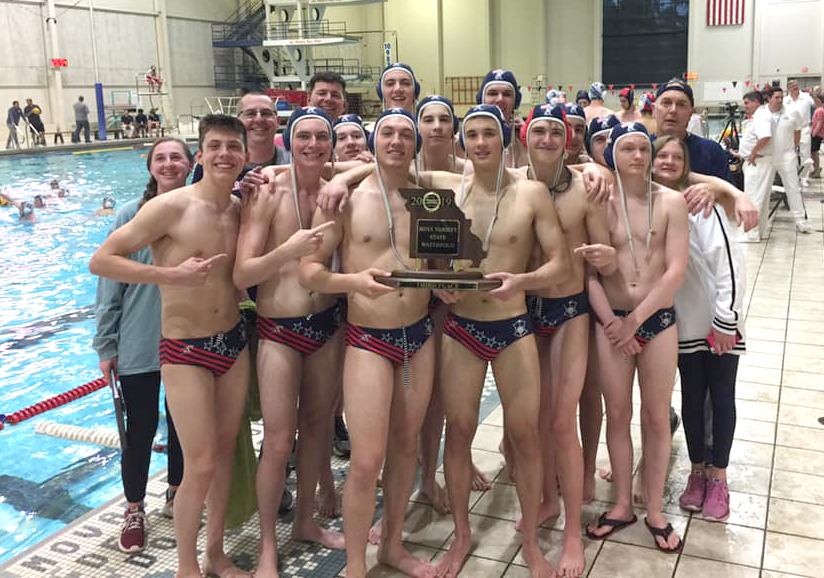 Members of the varsity water polo team hold up their third place trophy.

Members of the varsity water polo team hold up their third place trophy.

The Parkway South Water Polo team disperses after the first practice, with one clear goal in their minds – Finish top 4 in the state. It is a goal that they will chase with reckless abandon, overcoming countless obstacles along the way.

“From that first day at practice, our goal was simple. Top 4 in state,” sophomore Liam Smith said.

The team got off to a strong start, going 7-0 to begin the season. Throughout this run, the team won by an average margin of 15 points. The team was feeling great, when all of a sudden star Senior Marko Terzic went down with an injury.

“When Marko got hurt, it was a huge blow. Instead of getting discouraged, we learned to play more as a team, instead of relying on Marko,” Smith said.

Losing Marko certainly made the games more difficult, but the team had many experienced seniors that stepped up in his place.

“We have a lot of depth with a lot of experience this year. All of our starters have played off-season polo and our top players have played for South for 3-4 years. The team has been together for a couple of years. That trust and familiarity is important to our success,” Coach Jeremy Nichols said.

With the season winding down, the team beat Chaminade 15-1 to advance to the State Quarterfinals — they were one game away from their goal of being in the final four.

They would have to beat DeSmet, who they’d already played 3 times this year. South was 2-1 facing the Spartans this season, each game decided by a narrow 3 goals or less. In a hard-fought 8-5 victory, South advanced past DeSmet and into the state semi-finals.

Next up was juggernaut and perennial powerhouse SLUH.

“South and West are the only public schools to have won state in the last 33 years, so there is some pride to play for here,” Nichols said.

South lost 11-3 in the state semi-final to SLUH, who ended up winning the state trophy several days later. Now the team would play MICDS in a battle for third.

“2011 was the last time we made the final four. A third place finish would be South’s highest finish since 1999,” Nichols said.

The third-place game vs MICDS was more than just a game to determine 3rd or 4th, it was a chance for the Patriots to end their seasons well — and for many — their high school careers.

“It was one of our best games all season. We scored early, gained control, and then shut out their offense the rest of the game. The best part was being able to cheer on the Seniors as they left the pool for the final time,”  Liam said.

After a 13-8 win over MICDS to secure third place, the Patriots’ season came to an end. The Patriots finished an impressive 23-9, including reaching their goal of the final four.

While the team graduates many talented seniors, the Patriots have their eyes set on something even bigger next year — the team’s first state title since 1999.