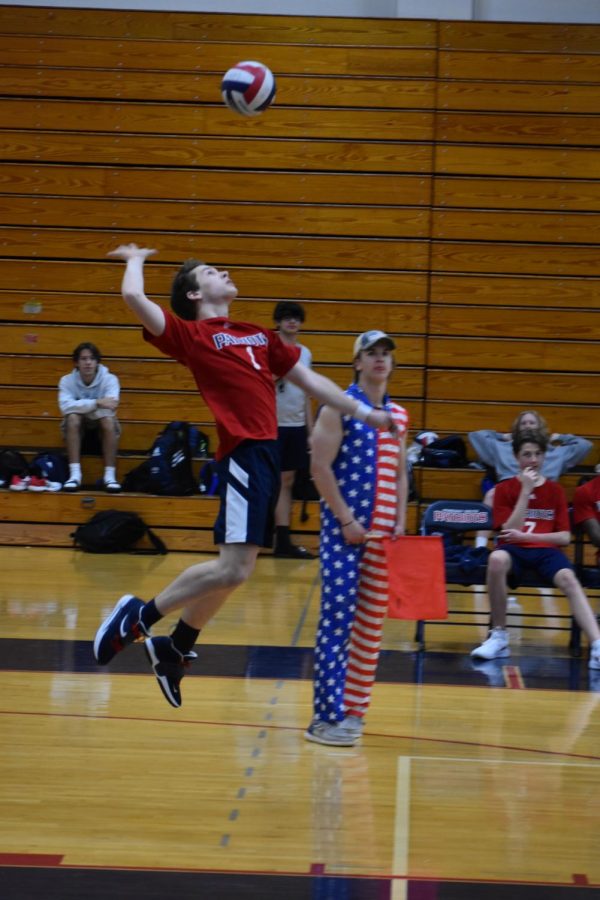 Sophomore Tyler Gregg leaps high in the air to serve the ball over the net in a match against Marquette.

Some varsity players might be hearing footsteps with a hot JV team on the rise.

Boy’s JV volleyball, led by juniors Nevan Valle and varsity swinger (plays both JV and varsity) Ryan Taylor, are spiking down the competition this season with a growing list of impressive performances, according to members of the team. Standing at 13-0, Valle said, the team is determined to finish with an undefeated season.

Valle had choice words for teams that are unfortunate enough to play them.

“We have a really talented team and at this stage in the game JV doesn’t have much competition for our team, ” he said.

Sophomore Rishi Kancharla, who spends his playing time on varsity, had similar sentiments to Valle.

“They’ll lose maybe a game against Lafayette or West, but other than that if they win, it’ll probably be a perfect record,” he said.

These are not just baseless claims according to the Patriot players. Earlier this season, JV capped off a practice by beating the varsity in a three-set scrimmage. Then later in the year, JV came within 2-3 points of a repeat victory over varsity.

Junior Ethan Schrader displayed even more confidence than some of the other members of the team.

“We are probably the greatest JV team ever assembled, they can’t stop us and we’re going undefeated,” he said.

Despite a flawless record, the team knows that perfection doesn’t end here. Valle said there are skills to work on and weaknesses to overcome.

“One weakness is communication, because our team is just so diverse in age, three juniors, two freshmen and the rest are sophomores,” Valle said.

Ryan Taylor echoed the same concerns but revealed one of the team’s strategies for success.

“Have a short memory and forget your mistakes,” he said.

Although Valle and Taylor might be credited for the team’s success, they recognize the players on the team who don’t always receive the same level of recognition. Dexter Cameron, Ethan Schrader, and Jefferey Day’s names were all acknowledged by the interviewees.

Schrader had his own pick for slept on players as well.

“I think one of the most underrated players is – Me,” Schrader said while pointing at himself.

Despite the team remaining almost entirely humble throughout the interviews, Valle had a final comment to add about possibly the single greatest athlete of all time.

“Lebron James can’t touch me in volleyball,” he said.