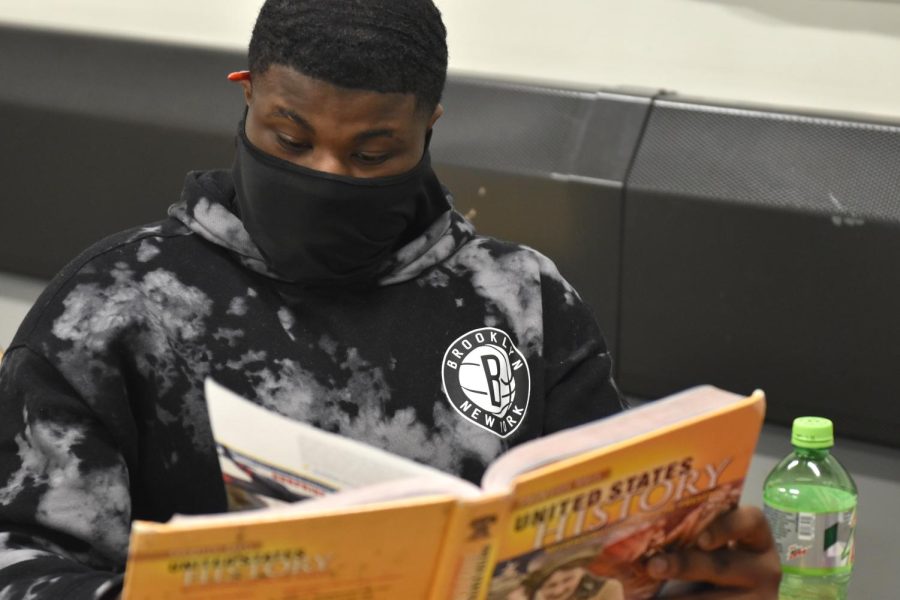 South High students will need to keep “masking up” till at least till mid-February.

After the Parkway Board of Education voted on Dec. 15 to make masks optional at the beginning of second semester, the rise of the Omicron variant of COVID-19 caused them to change their tune, and make masks a requirement. Currently, the Parkway mask mandate is in effect till at least Feb. 18.

Additionally, Missouri Attorney General Eric Schmitt has sued the Parkway School District, along with 44 other school districts in the state that maintain mask mandates.

Will masks ever become optional in Parkway this school year? Assistant Principal Eric Wilhelm said that decision will be up to the Board.

Junior Audrey Goodyear said she will still wear masks even if they become optional.

“Yeah, I think I’ll wear it whenever it first starts to kind of see what happens because I have a feeling it won’t last very long. I think we’ll have to go back to masks because with the new variant concerts and sports events are getting canceled. So I don’t think it’s a good idea when things are starting to get worse,” Goodyear said.

However, senior Sam Schmitt said he will not wear a mask if they become optional.

“Whenever they aren’t required I’ll never wear a mask ever again if I don’t have to. I don’t really need to. I already have a vaccine, so I feel like it’s overkill and there are a ton of studies that say it doesn’t really do anything you know,” Schmitt said.

Goodyear said she believes wearing masks helps prevent germs and keeps her from being sick.

“Obviously it prevents the spread of COVID and other germs. When we wore masks I noticed, I wasn’t getting sick as much, like last year, cold, flu. And slowly over summer when people were wearing them less I was starting to get more sick. Not with COVID obviously. But other stuff and that’s just important to me to remain healthy,” she said.

Schmitt said he believes the opposite. He thinks that wearing masks actually weakens our immune system.

“I feel like it’s important not to wear because I’ve been sick multiple times this year, and that’s because I’ve been wearing a mask I can’t get germs from school to where I can build up my immune system, so I feel like that’s a pretty vital thing we need to get down and get our germs,” he said.

Goodyear thinks more people should wear masks to protect those who aren’t vaccinated.

“Ensure spread of germs in general and also I know Parkway South doesn’t require a COVID vaccination, so I think it’s just an extra protection against COVID for people who aren’t vaccinated. Also if you aren’t vaccinated and you’re not wearing your mask you’re basically open to get it,” she said.

Schmitt said masks haven’t really negatively affected him, but they are just annoying.

“It hasn’t really affected me’ it’s just kind of an annoying little thing, like walking into school and saying ‘awww I got to get my mask from my car’ and you’re late to class; it’s just kind of a nitpicky little problem that gets under my skin,” he said.

If Parkway does choose to go mask optional, students might not have the option to change from in-person to virtual, according to Wilhelm.

“What the school district has said at the central office level, board of education level is students are not going to zoom into in-person classes, so I don’t think there would be the ability for a large group of students to jump to the virtual setting. I think again on a case by case basis we could make some of those things happen,” Wilhelm said.

“I don’t know that you can keep a classroom safer without masks.  As of now, I do not know what my classroom will look like if masks are only recommended. I will try to accommodate that student as best as I can, but right now, I don’t really know what that will look like,” Griesenauer said.

Wilhelm said that organizing classrooms in a mask-optional environment is a conversation that still needs to be had.

“Honestly we haven’t had that conversation as far as separating classrooms, administratively. That’s a good thing for us to have conversations with teachers about. We understand that parents and students are split on the importance of masks versus not, but so are teachers, which makes it challenging, too,” he said.

Positive cases have fallen drastically at South High compared to the start of the school year. At press time, there are 10 students positive for COVID-19, according to the Parkway Health Dashboard. The Board of Education has stated that, if Parkway was to move to a mask-optional policy, masks would become required at a school if its cases went above 2% of the population. At press time South’s positive case number would be under that 2 percent threshold.

Griesenauer said the Omicron variant is quite different from the previous strain of COVID-19–Delta.

“Unfortunately, Omicron is extremely contagious and is spreading like wildfire in our community,” she said.

Schmitt believes that people should just do what they feel is right.

“Everyone is entitled to their own beliefs; I feel like everyone should just do what they want. I feel like if you’re wearing a mask in a car by yourself that’s kind of overkill. Definitely just do what you feel you need to do,” Schmitt said.

Wilhelm said despite the mask division, now is the time to come together.