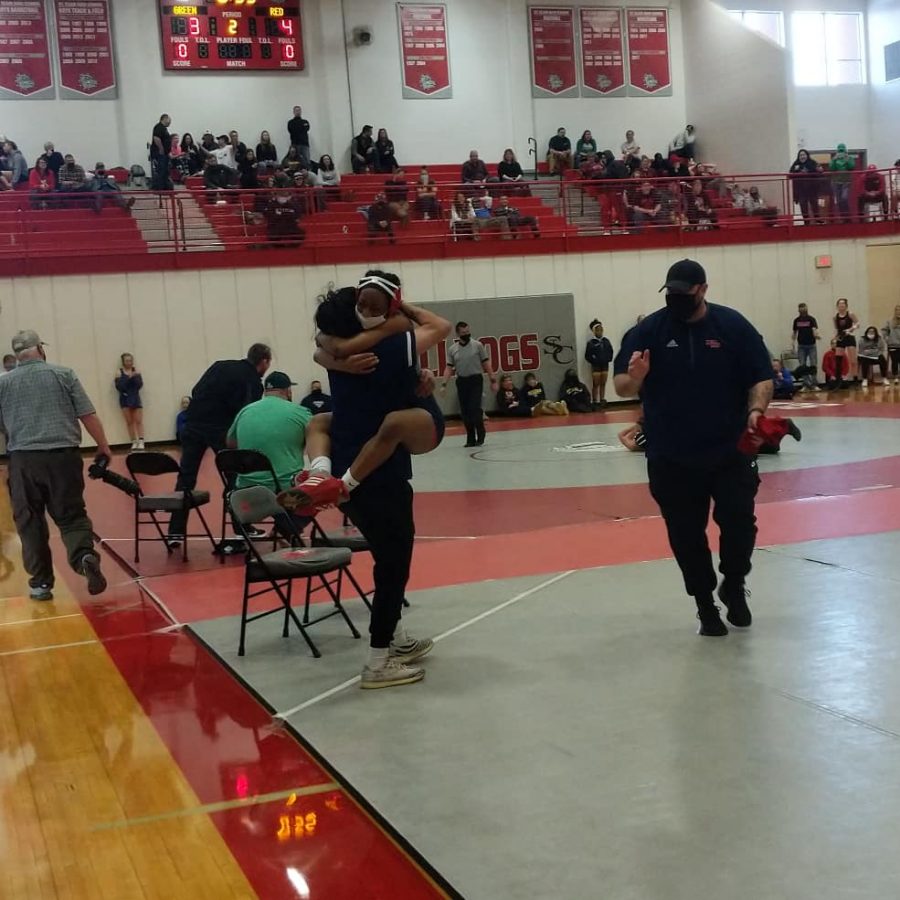 Sophomore Janiah Jones leaps into the arms of a teammate after qualifying for the state tournament.

Janiah Jones is a sophomore on Parkway South High’s girls’ wrestling team. She is in the 127-pound weight class  and will compete in the state tournament tomorrow in Kansas City, along with sophomore Nadia Middendorf.

Being in a predominantly male sport doesn’t bother Jones.

“I’ve always been used to doing the things most girls don’t want to do, I’ve played football with guys since the age of 7. So wrestling to me is something that I think girls can do just as well as guys. I love the thought of girls taking over something that mostly guys do. Girls can do just as much as guys can and sometimes even better, so I’m all for it. And plus, since there aren’t a lot of girls wrestling we have easier access to college scholarships and things like that,” she said.

Coach Greg Mattison describes Janiah as, “high-energy, positive, super outgoing but also fierce and a big competitor. She’s an outspoken leader on our entire program. In her first season last year, she excelled on sheer natural ability. However, this year she is quickly becoming a highly-skilled technician, investing in extra training, working on mindset training, all added to her natural ability which is why she is making the step to a new level.”

Jones said people have different reactions when they find out she is a wrestler..

“Most people who don’t know me well and when they first find out I am a wrestler, they seem a little shocked because it is still relatively new and not a lot of people wrestle, especially females. Some guys find it intimidating, some find it interesting and I love explaining how wrestling works and it’s always nice to tell someone or introduce them to something new,” she said.

“I actually walked into wrestling out of curiosity. My freshman year, my friend said she was going to try out and she dragged me into the wrestling room and I haven’t been able to step out of there ever since. I never saw myself here. In fact I didn’t think I was even capable of it. But now that I joined all because one friend wanted me to try it, I don’t regret it. Once I started to understand and learn, I learned to love it,” she said.

Jones said she thinks girls do have some advantages over guys on the mat.

“Team-wise, the girls create a better bond than the guys and that just makes the experience all the more fun. We have so much pressure on our shoulders as girls that we get expected a lot. However, I’m not saying girls can’t reach those expectations but girls tend to have to dig deeper and find it within themselves to make things happen and the same thing can be applied when we wrestle. And sometimes, the girls tend to be more reckless and aggressive while the guys tend to scope each other out before going into action. We have our ups and downs but girls do have a lot of good physique on our side as well. We tend to emphasize leg muscles and lower body strength while guys are upper body. Girls get flexibility and mobility easier while guys don’t,” Jones said.

Mattison is the head coach for both programs. However, he said there is a difference between coaching boys wrestling and girls wrestling.

“The girls are held to the same expectations and do everything in practice that the boys do. I learned from listening to Terry Steiner, the head coach of the Women’s USA Wrestling Team, that the team women on his team ask more questions, want to know more details, and want to talk about aspects of wrestling more. So we talk and listen more than what the boys typically care to do. Perhaps it’s also being the father of a teenage girl myself (who will wrestle for South in 2 years) that helps me to nurture the girls,” he said.

Mattison said he tries to inspire their players with positivity and belief.

“We believe in our wrestlers and our goal is to transfer that belief to them. We work with them to set high goals and then help drive them to those goals. I have been blessed as an encourager so my style is to see their potential and encourage and push them to reach that potential. So much of our culture tears people down so we have to counteract what culture normally says about kids, girls especially, and break those bad routines and replace them with positive affirmations. In our first practice, we talk about BIG, the Build Up Game, rather than tearing others down, we build them up,” said Mattison.

Jones said her wrestling tactics have changed from last year.

“My wrestling last year vs my wrestling this year is a HUGE difference or at least to the trained eye. Last year was still a good year but I didn’t really wrestle, my style was more of manhandling people. This year I actually work on my technique and positioning and you can definitely see how well I have improved. Last year, I was also scared to try new things and I would always hesitate or not think about what I would do before I did it. In comparison to this year, I still somewhat hesitate but when I’m ready, I pull the trigger and I am always spot on where I want to be,” she said.

Jones plans to keep wrestling in her future for a while.

“As a sophomore right now, I’m already planning on wrestling in college because it has already made such a big impact on me and I want to see where it goes. I really hope my teammates find it in themselves to take it to the next level as well but I for sure am. I’m excited yet nervous but I still have a few more years ahead of me so we’ll just take one step at a time,” she said.

“A lot of things excite me about going to state. It’s definitely a new level of wrestling with a different and more competitive environment. It’s something I look forward to because I feel like I earned it and it’s one of my goals that I worked towards. Last year was my first year and although it was successful, I didn’t get what I wanted out of it so this year I wanted to come back and do better and achieve the goals I didn’t get to,” she said.

Jones does have a few worries as well about state wrestling.

“I’m more nervous about the competition there and how I’ll do more than anything. I want to do well and no matter what happens, I’ll leave it all out there but my adrenaline always gets excited at the thought of a new tournament or opportunity. But I feel prepared so I’m just ready to see how this goes,” Jones said.

Coach Mattison believes wrestling is important because of the life skills learned.

“Wrestling is important because it teaches many critical life skills that will serve the girls, and boys, far beyond their competitive years. Grit, hard work, perseverance, discipline, determination, rising from failure, self-belief, mental strength, courage, and teamwork are some of the characteristics we can see growing in our wrestlers. Life can be hard and the adversity wrestlers go through every day helps them build these important life skills,” said Mattison.

Jones says the best part of wrestling is her teammates.

“The best part of wrestling to me is the family and companionship I built with the other girls and just being able to see how far I’ve come in this season. It’s fun that you get to build with your teammates and travel together and compete and when we all win it just makes life at this time a little more bearable. My girls are really my favorite part of the season and I love watching each of them grow,” said Jones.