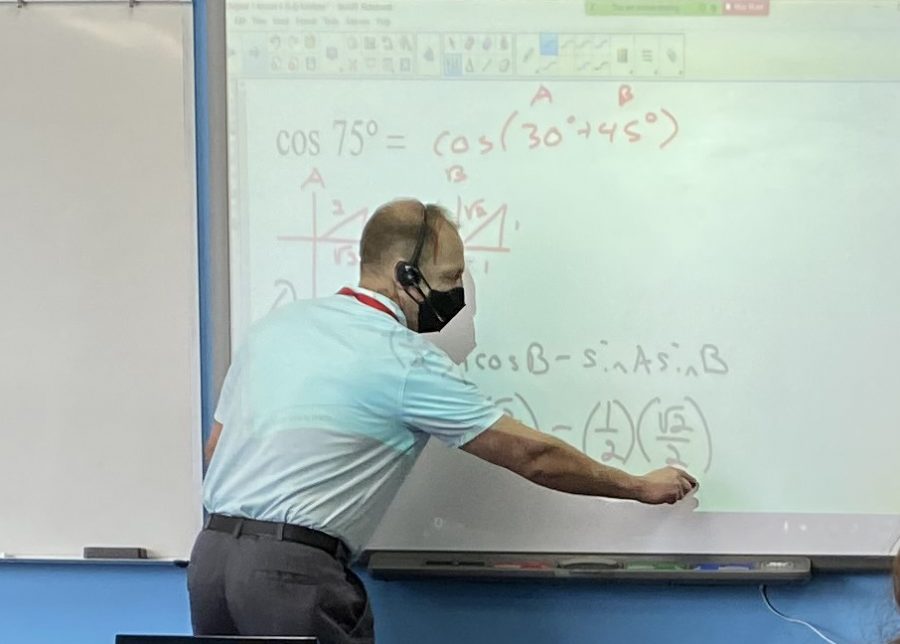 Jason Koehrer teaches students about sines and cosines in Pre-Calculus.

During the 2020- 2021 school year, National Honor Society (NHS) has been choosing a teacher from a different department each month to recognize. The Teacher of the Month for December was math teacher Jason Koehrer.

Junior NHS member Ana Fracchia went over the process NHS uses to select a teacher of the month.

“Basically, every month at our meetings, we fill out a survey saying which teacher in that specific department is our favorite. Every month is a different department,” said Fracchia.

For December, the math department was up for a vote. The December winner, Koehrer, teaches AP Statistics and Pre-Calculus. Koehrer has been teaching for 18 years.

“I became a teacher for the money. Kidding! I find the ability to help others gives me a tremendous sense of satisfaction(I have worked in other jobs that did not),” said Koehrer.

Koehler’s students and colleagues said they see the passion and excellence  Koehrer possesses when teaching.

“Mr. Koehrer is both brilliant and hilarious while also caring so deeply about every student. He knows how to engage students, how to hold their interest (whether they like the subject or not), and how to make them want to work for him. He’s just simply a master teacher and a perfect choice for the teacher of the month,” said Scott Degitz-Fries, a fellow math teacher and NHS sponsor.

Degitz-Fries is in his 25th year of teaching at South, but this is his first year as NHS sponsor.

“I was in NHS in high school (Momence High School, to be specific), and I considered it a huge honor to be inducted into NHS. It was always something I thought would be so cool to sponsor, but I started the Math Club and Scholar Bowl at South and was busy with both of those- plus NHS already had great sponsors. When I heard the NHS sponsors were moving on to other things, I decided it was my time and my calling to step up and sponsor the club I had wanted to sponsor for 25 years,” said Degitz.

Both Degitz and Fracchia described Koehrer’s teaching as fun and entertaining.

“He is a really funny teacher and makes math fun. He is able to teach math in a way that I don’t fall asleep, and he doesn’t do the bare minimum shills teaching. I have his class first thing in the morning, and he is still able to get us engaged even though we are all half asleep,” said Fracchia, who also has Koehrer as a teacher this year for Pre-Calculus.

Koehrer said he enjoys teaching not only because it gives him tremendous satisfaction but also because of student interaction and students’ moments of understanding.

“My favorite thing about teaching is interacting with the students. I love the ‘aha’ moments. I also enjoy it when students are thinking hard and see success. After Zooming through the first semester, I even have found that having students respectfully complain is something that I missed and enjoy,” said Koehrer.

Although Koehrer enjoys teaching, he also has other activities outside of school.

“Activities outside of teaching include spending time with my wife and two kids. I spend a lot of time watching my kids engaging in their activities. I also enjoy running when it’s not miserably cold outside,” said Koehrer.

In the end, Koehrer said being selected as Teacher of the Month is a huge honor.

“Being selected as Teacher of the Month is a huge honor, especially this year. I can’t tell you how many times I have ended a Zoom meeting this year and felt like a terrible teacher. Zoom doesn’t provide for the level of interaction, and I enjoy teaching. It is nice to know that, for at least some students, my efforts to engage through Zoom were not wasted,” said Koehrer.