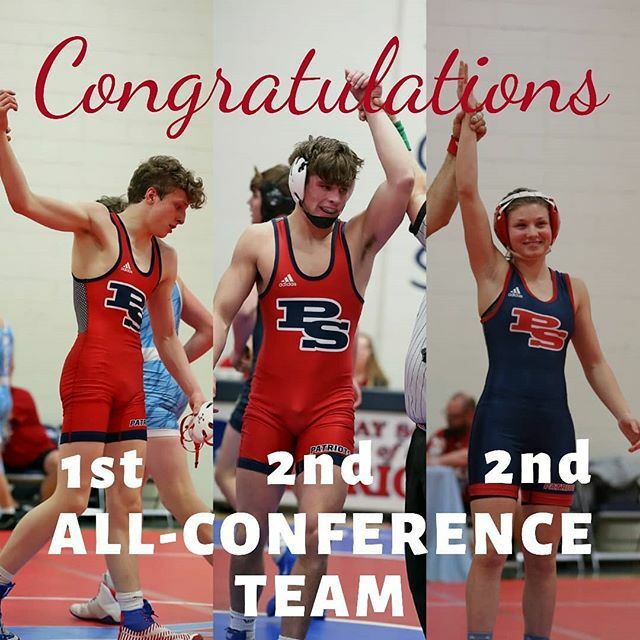 Your arms are deathly sore. Your vision is clouded by sweat and your mind is fogged by exertion. For the last five minutes you have been pushing your body to its limit – past its limit.

With your body screaming to give in, there is only one option left: fight.

Wrestling is a sport that requires extreme focus, toughness, and skill, all traits that the Patriots wrestlers display every day. Cultivated through hard work and grit, the Patriots have a team culture that breeds success on and off the mat.

“Team culture is critical to any successful program and we’re working hard to build a family of young men and young women who love each other and love the sport,” said Head Coach Greg Mattison.

Crucial to any team is its captains, and both the boys and girls had experienced leaders that stepped up and set a tone of hard work.

“On the boys’ team, our leaders were Max Rinklin, Jake Sinn, and Kevin Watkins. First-year juniors Bishop Moore and Trystin LaRue-Green stepped up as leaders as well. Leaders on our first girls’ team were Lizzie Levins, Nadia Middendorf, and Janiah Jones though this tight-knit group of girls all pushed each other,” Coach Mattison said.

A major storyline this year was the addition of a girls’ wrestling team to our Patriot wrestling squad. The team flourished in its first year, with every girl producing good results and freshman Nadia Middendorf qualifying for the second annual Girls State Championships tournament. Needless to say, the coaches were proud.

“Proud doesn’t fully capture how we coaches feel about these girls. They bonded quickly and came together as a team, which we love seeing. Each of them is athletic and they work hard and focus in practice, which is why they improved so quickly,” Coach Mattison said.

After qualifying Nadia for state in the program’s first year, the Patriot girls will look to build on this success in the coming years.

“I was extremely happy with my first season. I wasn’t expecting to go to state, but I’m glad I made it. The District meet where I qualified for state will always be a special memory for me,” freshman Nadia Middendorf said.

Nadia had done jiu-jitsu with her dad growing up but had never before tried wrestling. Motivated by her dad who wrestled in high school, she decided to go out for the team this year.

“Wrestling has shown me the importance of hard work and it has made me more grateful, tough, and calm. Wrestling was sort of an unknown, but it has helped me in so many ways. It shows that you never know what an experience will be like until you try it,” Middendorf said.

The girls on the team became family through hours of hard work together, and Nadia hopes that in the future more girls at Parkway South will give wrestling a shot.

“I would love it if more girls came out for the team. I want them to be helped in the same way I was helped, and I can’t stress enough how beneficial the program was for me. The relationships I built, the hard work I put in, and the lessons I learned were all priceless,” Middendorf said.

While the girls’ team flourished in their first year, the boys’ team was equally successful, with senior Max Rinklin and junior Jake Sinn both qualifying for state. Unfortunately, despite attempts, Max Rinklin was unavailable for comment.

Junior Jake Sinn finished 4th in the state despite several setbacks. Last year Sinn transferred to South from CBC, and because of this, he was forced to sit out the end of last season and the beginning of this season.

“I’m definitely satisfied with how the season finished, considering some of the setbacks I went through. In my first match back this season, I injured my back and missed the next month of wrestling,” Sinn said.

After being forced to sit out and then missing even more matches because of the injury, Sinn was only able to wrestle two matches before the postseason.

“If everything had gone right, I definitely think I would have been in the finals,” Sinn said.

Despite extenuating circumstances, Sinn still managed a 4th place finish at State. While most would be satisfied with such a strong performance, Sinn is motivated to finish even better next season.

“Next season I want to go undefeated and finish by bringing South a State title,” Sinn said.

This may sound like a daunting task, but Sinn is up for the challenge, wrestling year-round in preparation for the season with the United States Wrestling Academy.

Both the boys and girls Patriot wrestlers are looking forward to a successful season next year – a season that will only be made possible through hard work and dedication. While dedication, hard work, and teamwork are important, every wrestler on the team agreed that it all starts with their excellent coaches.

“I want to express my gratitude for all of our coaches. Without them, nothing would be possible. They drive us places, motivate us to be our best, and get the best out of us every day,” Middendorf said.