Substitute teacher Scott Winfrey has made an impact at South. 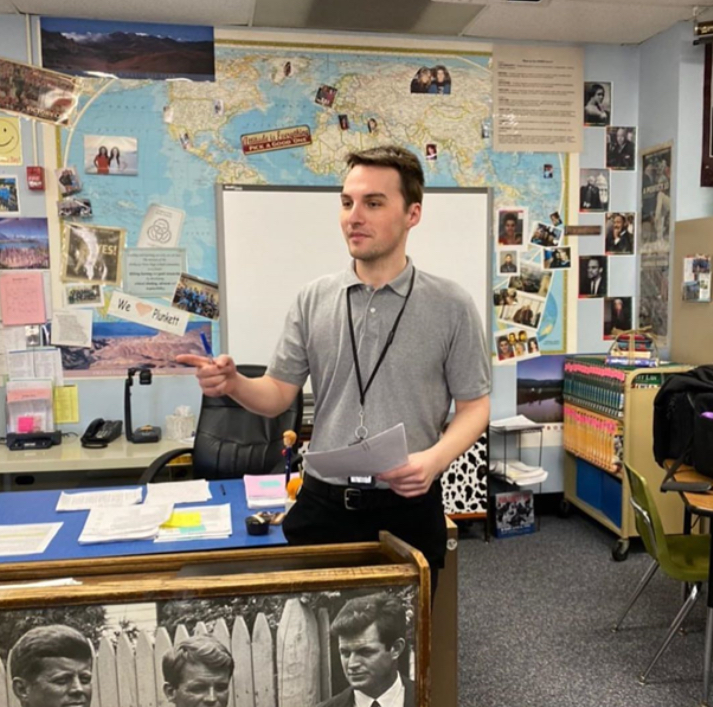 You walk into math class. It’s a Monday morning. Half the class is asleep and the other half is late. You’re already dreading the rest of the day. But as you take out your AirPods and look up, a sense of euphoria rushes over you, as a savior struts through the door frame; Scott Winfrey will be your substitute teacher today.

A Parkway West alum and a beloved substitute among students, Winfrey is the ace of all subs. He is not only inspirational but down-to-earth, teaching students to be the best person possible, not just the best student.

His effect on the student body is so widespread that both under and upperclassmen have developed a liking for him.

“He’s more motivational than most subs,” Garimella said. “Unlike the others, Mr. Winfrey is always positive and connects to you on a personal level.”

Junior Margo Nelson thinks Winfrey has a bigger impact on students than other substitutes.

“He truly seems to enjoy his job and he makes connections with the students,” she said.

Aside from liking his personality, junior Daniel Tabaka said he likes Winfrey for the way he handles class.

“He actually takes the class into his own hands and makes the day worthwhile rather than a missed day since the traditional teacher isn’t there,” said Tabaka.

Winfrey has become so popular among students that kids at Parkway West have created a fan account on Instagram for him (@mr.winfrey), uniting both South and West kids. Students like me have followed the account to support this movement towards more modern and practical teachers, an example that Winfrey is setting quite well. The account gained traction quickly and is approaching 1,000 followers rapidly.

“He’s come up to me and helped me with college. His whole point is that anything you want to achieve is possible with networking,” Clement said.

Winfrey himself didn’t originally choose teaching as his first choice.

“I originally was studying business in college,  but I found myself in a dilemma. I did not want to measure my time, by just accumulating money. The real wealth in this world is accumulating knowledge and experiences. Then give it back to the next Generation,” Winfrey said.

Winfrey said he loves being able to give back to the community, and it’s a big part of why he pursues education. Currently, Winfrey is working toward his Master’s degree in Education in Adult & Higher Education at UMSL.

Students, such as Tabaka, remember specific encounters that help change his life every day.

“My favorite memory of Winfrey is when he was in my math class before finals week,” Tabaka said. “He could tell we were all stressed, and told us it was okay to move around and work with others, collaborating on problems. His big issue is networking, so by working together, we were communicating and relaxing a little.”

His keys to success are so impactful, that it is his most prominent feature to some people. From networking to involvement and to relationship building, he has made himself quite the phenomenon.

“Just talking with him about how to become successful by networking is the best memory I have,” Nelson said.

Clement and Garimella agree with Nelson.

“I remember I had him for the first time in art, I had no clue who he was. But I was taught many things that day, and he left a big impression on me for the standard of high school substitute teachers,” he said.

“He’s so relaxed and understanding. He acknowledges that we’re all stressed out students who struggle to see the big picture,” Clement said.

After getting a chance to speak with him myself, he left me with final words of inspiration.

“If you take away anything from me, it should be education is a community effort. Everyone from the students to the superintendent should be active and involved,” Winfrey said.

To me, Winfrey has set a bar that seems to be unattainable by anyone else in the near future. His ability to make others smile and laugh while doing their work is unrivaled, and he keeps students engaged. If possible, I’d take a class purely because he was the teacher. Most high schoolers like me dread going to school every single day just to learn useless content that won’t help us in life. But when a figure like Winfrey walks in with inspiration and charisma, I automatically look forward to a class he is subbing for.

“I hope that we can all work together for a bigger purpose,” Winfrey said, “Education! Not only teachers but everyone involved in the community.”

It may be his youth, but he is able to connect with us so easily that it makes him feel more like a role model than a temporary teacher. One memorable quote I have from his is about the students themselves.

“Being able to come here every day is like a vacation for me. I love all you guys,” Winfrey said. This is the level of connectivity that makes a kid actually want to come to school.