Fan of Star Wars, Tiearney is 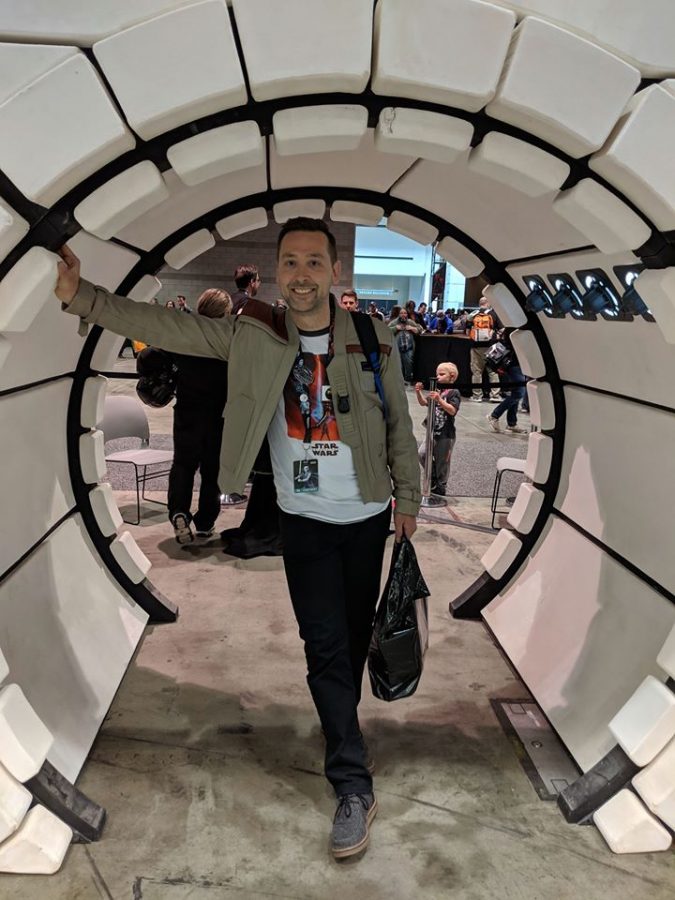 Latin teacher Jason Tiearney enjoys himself at the Star Wars Celebration over the summer in Chicago.

May the Force be with you as it is for Latin teacher Jason Tiearney.

Tiearney is a Star Wars fan through and through. Ever since he was a child, he has been a fan of Star Wars.

“I was born in 1983 so I wasn’t born in the original Star Wars era but my older cousins had all the toys in their basement and when I went to their house I would play relentlessly with all with their toys. My dad is a fan and I remember watching the movies on VHS,” said Tiearney.

Besides watching the movies, Tiearney also makes models of some of the Star Wars characters as a side hobby. He started this hobby when he was younger.

“Building models is something I started doing as a kid because there were a lot of them available and I was in cub scouts and 4H and that was something you could do in that,” said Tiearney.

Making models is a big part of his life now, but it wasn’t always.

“For a long time, I didn’t do the hobby because I got frustrated as a kid and then I really took it up again toward the end of grad school and need something to take my mind off the stress of grad school. And I got into building models again and it’s been a really relaxing hobby for probably like ten years now,” said Tiearney.

“As a kid when I was into models it was because I wanted something tangible so it was a way for me to connect with it. But because it is such a precise hobby as a kid it was super frustrating where I kind of got out of it. And then came back to it. The first model I bought after getting back into the hobby was a roman warship and that was at the end of grad school. And for me I spend all day working with people and talking to people, the hobby for me is to disconnect from people and is a way for me to recharge. It’s very relaxing,” said Tiearney.

Tiearney works on the models in his basement and also displays his projects.

Tiearney’s love for Star Wars runs deep, it is shown in his classroom and in his lessons.

“There are occasions where he will talk about it as he sees the opportunity. But we do vocab and he puts pictures on the board and they will be off Star Wars. Like when we learned the word for slave girl he put a picture of Princess Leah on the board. And at the beginning of the year, he talked about how much-beloved Star Wars. He does bring it up but he always relates it to what we are learning,” said sophomore Christina Politis who is in Tiearney’s Latin class.

Tiearney isn’t the only teacher who has a love for Star Wars. Speech/Debate teacher Mike Hachmeister is also a fan of the movies.

“It’s a bummer that we are done with the nine original movies and so he and I talk Star Wars pretty regularly out in the hallway as we are doing duty regularly and so we are just going to have to find other things to talk about,” said Hachmeister

Hachmeister said he finds Tiearney’s love for Star Wars to be pretty cool.

“I think it’s pretty cool myself just because its something he is into and is proud of the that that he is. He has Star Wars ties, shoes, and socks, and coats and all that kind of stuff. But the other thing I think is cool is that students can relate to it and its just another way he is able to connect with students. And I think that always is a good thing,” said Hachmeister.

As Star Wars has always been a big part of Mr. Tiearney’s life, it’s something special he has and can share. He said he appreciates Empire Strikes Back as a film, but his favorite movie is Return of the Jedi.

“I mean Star Wars has been a big part of my life for my whole life. It’s a creative outlet for me, it’s an escape outlet for me, its something I can share now with my kids. It’s been awesome to try to pass it down to the next generation,” said Tiearney.