More than just a vacation

While many students visited beaches and lakes over the summer, junior Iris Cameron did something different. 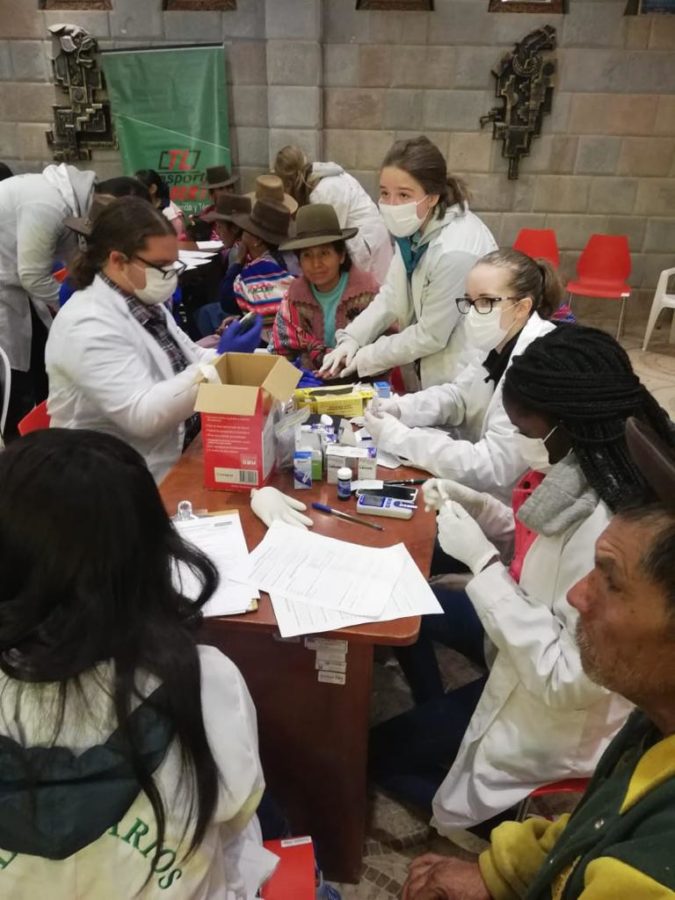 Junior Iris Cameron and other nurses and volunteers prick peoples' fingers to test for Anemia and Diabetes. Cameron traveled to Peru over the summer to learn more about medicine.

Tuberculosis, stabbing victims, and deadly bacteria are all things junior Iris Cameron had to deal with this summer on her month-long trip to Peru.

Over the summer from July 5-Aug. 4, Cameron traveled to Peru for a medical internship by herself.

¨I wanted to learn more about the language and about the medical side from other countries,” she said.

Cameron said the people in Peru speak the same Spanish dialect as the one she is learning, and that was an intriguing factor, as well.

When she was there she spent most of her time in hospitals and medical student workshops, but she also got to see different historical and nature aspects of Peru–including Machu Picchu.

The city Cameron called home for her stay was Cusco. She said it is a city with old churches and colonial architecture. Cameron learned of the opportunity through Projects Abroad, an organization that helps kids travel to various countries throughout the world to help the community.

However, the trip wasn’t all work for Cameron. She said she was able to go sight-seeing and enjoy the Peruvian food. She said the Peruvian cuisine consists of a lot of meat, which was a problem because she is a vegetarian.

“Most of the food we ate was made with meat. I had to pick out the meat before I could eat it,” she said.

Now going on this trip was big for Cameron but it also was a big thing for her friends and family. Cameron’s friend, junior, Emmaleah Stapp said she missed Cameron while she was gone.

¨I was super excited for her because I was going to Israel and we were going to be on opposite sides of the world. It almost felt like we were traveling together. I was also a little bit nervous though because she was flying alone and she didn’t know anyone else going. We did get to communicate though through WhatsApp and Marco Polo,¨ Stapp said.

¨Spanish class does prepare you for trips like this but it will never be the same thing as going there and experiencing it,” she said.

On top of all the fun things Cameron did in Peru, there were also a lot of crazier things that happened there. She said it was eye-opening to see how different health care was in Peru compared to the U.S.

¨One time a lady walked into the ER and she had Tuberculosis. They started treating her without any gloves on. Also one-time there was a deadly bacteria in the ER and I couldn’t go into the hospital one day. Another big thing was that a guy came into the ER and he was stabbed and the police had to come because it was an attempt on his life,” she said.

¨My trip was an overall learning experience for me in regards to language, culture, and medicine in a third world country. I really enjoyed it, even though there were some surprises along the way,¨ she said.